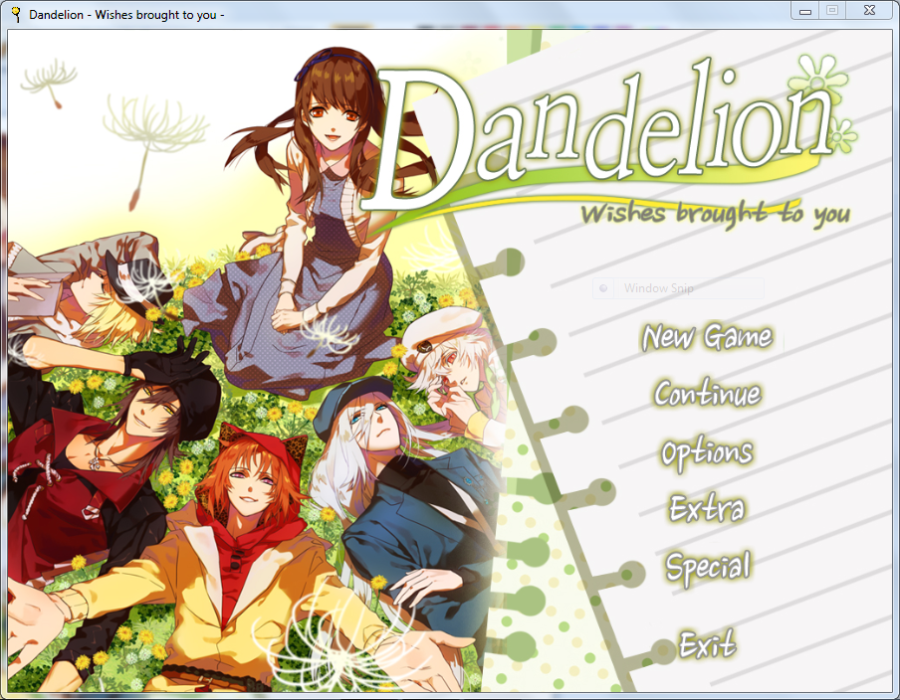 I already did a mini-review a week ago just in case I take too long to complete the game, and I wanted to express my thoughts and feelings after my first route. But this time, after getting all the good endings, and unlocking the extra scene, I really do have the urge to review this game.

Dandelion - Wishes brought to you - is a really amazing game. It tugs at your heart, makes you emotional, gets you attached to the characters (including the heroine!) and it shows that you can't always have a happily ever after ending (because that is not reality). Despite the strange setup with animals turning into humans, and them being from a separate world, the routes do seem realistic


The Story of the Heroine

It's a realistic story. Heejung's predicament. Despite moving out of her mom's home, she still leads the same life she had with her. Always doing everything because of her mom. Must get A+ in all her classes, must go to cram school to raise her TOEIC score, must do all her assignments perfectly, must do this, must do that, so her mom can acknowledge her and love her again, just like before the divorce. I'm surprised that Heejung became somewhat normal (just like what Jiwoo said in his route). Heejung lives her life for her mom because she loves her and desperately wants to be acknowledged and not to be left alone. That's why she continues her life the same way even after she moved out. Because of this, Heejung isn't happy and she doesn't know what she wants in life anymore.

I could understand her suffering, being around the same age as her. Pressure from society and mostly from her mom, made her that way. Living a life because of other people. There aren't many main characters in otome games who have a sad background and a distinct personality. That's why Heejung is one of my favourites (Hitomi in Love Revo and the MC in Love Letter from Theif X are my other favourites). She isn't weak at all. How can she be after what she's been through?

With each route, we get to see different sides of Heejung. From awkwardness in Jihae's route to being frightened in Jiyeon's/Jisoo's route. From a "sadist" in Jiwoo's route to a mother in Jieun's route. Sure, she may be slow to realize her feelings, but I forgive her for that. No one taught her how to even find what she likes to do with a mother like hers.

This game is a stat-raiser. Even after 5 separate playthroughs, I still find it fun. Though, I do have a high tolerance for monotonous gameplay (Harvest Moon, anyone?). Interacting with the guy of the route I am on was the most fun part. Seeing his dialogue every increase in affection for Heejung was truly interesting. From being indifferent to totally head over heels over her. :)

Even for the dates. I always quick-save before going on dates, so I can quick-load easily and go to every date spot and choose every option, just so I can see the different dialogues. Oh, and get as many stamps as I can. (See below screenshot. Still sad about Jiyeon's failed to get 3 stamps. I have to restart his whole story to get them.)

Besides dates and interactions with the guys during activities, the cutscenes (AKA memories) made the game not too boring. I always get excited when the loading screen appears, because I get to see what will happen next in the story. But because of the cutscenes, sometimes I forget what I was doing in terms of the actual gameplay. ^_^; 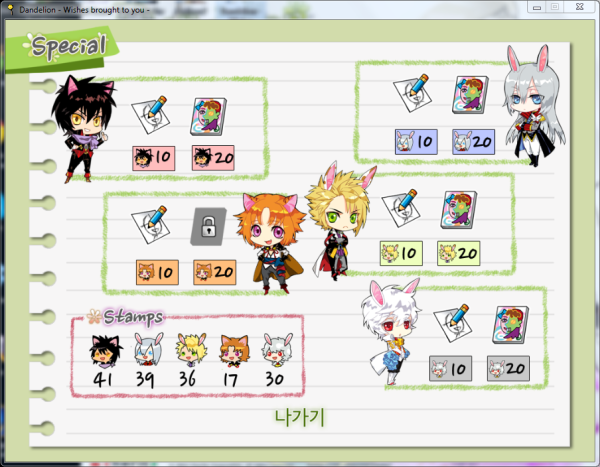 The stats don't affect the ending you get. It's just a way to not get a bad ending with Heejae and continue the story with the guy of your choice. So I guess it was kind of a filler game mechanic. Jisoo needed 20 levels of art, which made sense since his story revolves around it, but the stats still felt kind of detached from the story. At the end of the game, Heejung's stats were already high enough, and I felt like they don't matter much. I never really had troubled with the stats in any of my gameplays. Though the beginning of the game, it was a bit difficult because my stress and pressure bars went up quickly, but I guess since I always level up stress and pressure to around 5 or 6 at the beginning of the game before unlocking other activities, that they don't bother me anymore. All in all, the gameplay was easy for me.

The game has partial voice-acting, only happens during cutscenes. Not during dates or activities, but to me, that's enough. The cutscenes are what's important, after all. The voice-acting seems like high quality, too. I don't have any complaints. Even Heejung has a voice! I find that a wonderful change. :) Oh, and the other characters like Heejae and Heejung's mom, along with all the random people have voices, too.

The music fits the game. The activity music changes depending on the season, date music changes (not sure exactly when), and the cutscene music plays and stop according to the dialogue. When it gets serious, the music stop altogether. When we learn of the guys' sad stories, the emotional, sad music plays. That kind of thing is nice. 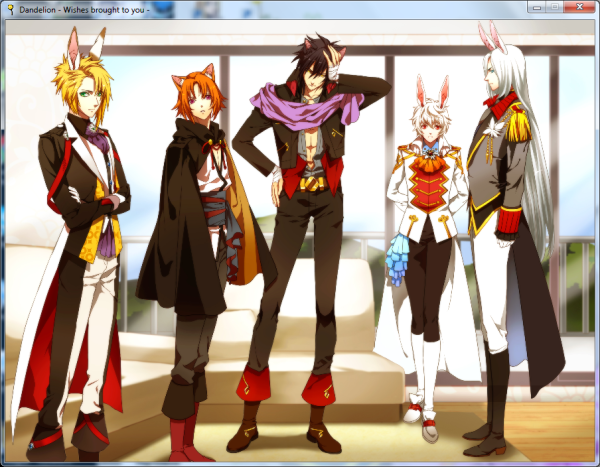 The game zooms in to the CGs a lot during the cutscenes, so you can see the itty-bitty details. They are of high quality. The sprites of the characters are pretty, too. Their mouths even move when they talk (but not exactly with the the words they speak). I don't really have any complaints.

The designs of the characters are otherworldly, which makes sense since they are not from the human world. And you can kind of distinguish the kind of background they have. Not all bunnies are of high class and not all cats are of low class, though. But I'm not 100% sure since we don't know much about the world they come from.

Each character is distinct, not only the guys, even the heroine, her mom, and Heejae. I've already talked about the heroine, Heejung in the first section, and how she's relatable. But I'm going to talk about the 5 main guys you can pursue in this game here. Spoilers below!! I'm gonna talk about them in the order in which I played them. Jieun > Jiyeon > Jiwoo > Jisoo > Jihae. From first to last.


Jieun My thoughts on Jieun

[Spoilers about the Wizard and the whole game]

The Wizard and the Game: 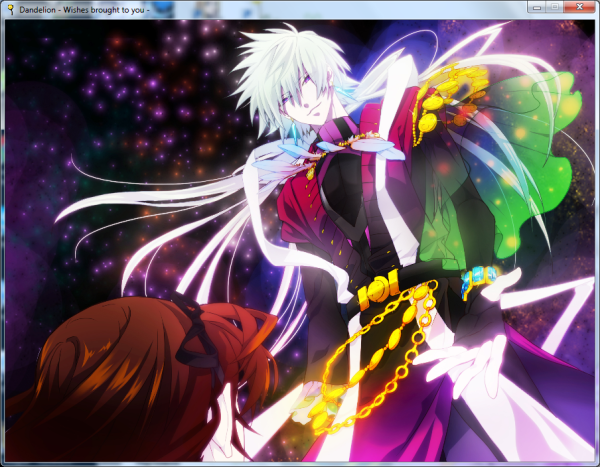 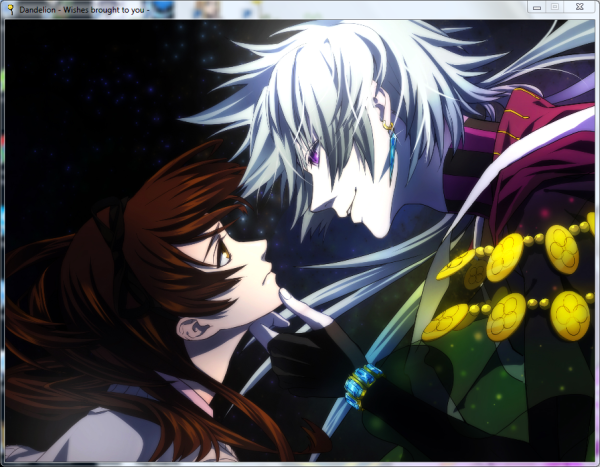 After completing all of the 5 good endings, you unlock the 6th character in the Bonus section: the Wizard. The Wizard doesn't have a route, but instead, you get to see how the whole "Game" came about and why the Wizard is so obsessed with the heroine. I was so ecstatic when I saw this because throughout all my playthroughs, I was wondering what the reason behind the Wizard's actions and why the happy endings were so bittersweet. We also get to see the heroine's life before the beginning of the whole game (the actual game that we play). Watching this Behind The Story scene really made me understand the endings. It's even crazier to think that there is a different dimension every time you play a guy's route because the Wizard rewinds the time just before the "Game" just to see the heroine again. So it's nice to think that none of the 5 guys' endings is the true ending (despite in Jieun's end, the Wizard said that it must be a true happy ending if the heroine never got to meet him, it's just another dimension). All the endings happened, and all the guys won the "Game". Even the Wizard have his own dimension where he has HIS wish come true. Well, the open-endedness of his ending could lead to many possibilities, but at least he can be in the same world as the heroine. 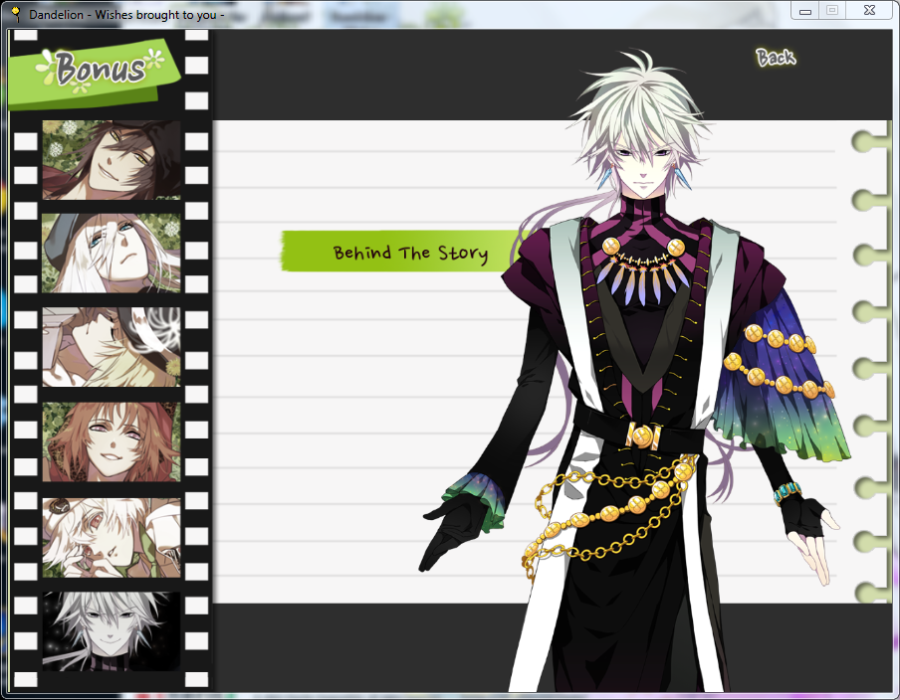 I just find it fascinating that this whole game (the actual game that we play) is a setup by the Wizard. And each playthrough is him rewinding back the time just to see the heroine experience many emotions again. Even before we see the animals in each fresh playthrough, the Wizard talks about different things like in the screenshots below. Even my second playthrough, after completing Jieun's ending, he mentions that he was disappointed that he didn't see her the last time (because in Jieun's ending, the heroine never did meet the Wizard). This game is probably the first game where I didn't load a previous save file to start with, but start a fresh new game. Well, you needed to do that to get the stamps to unlock after the happy ending. 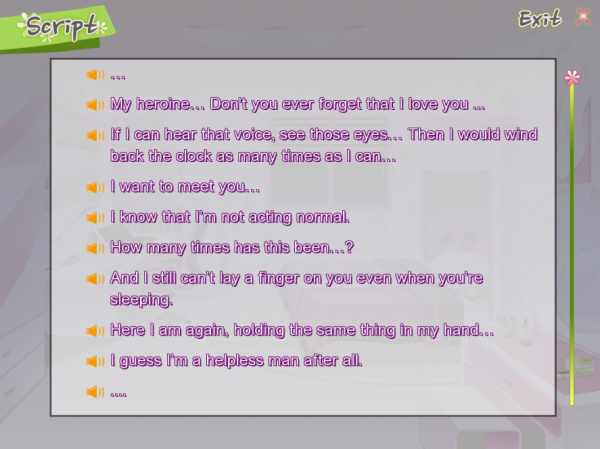 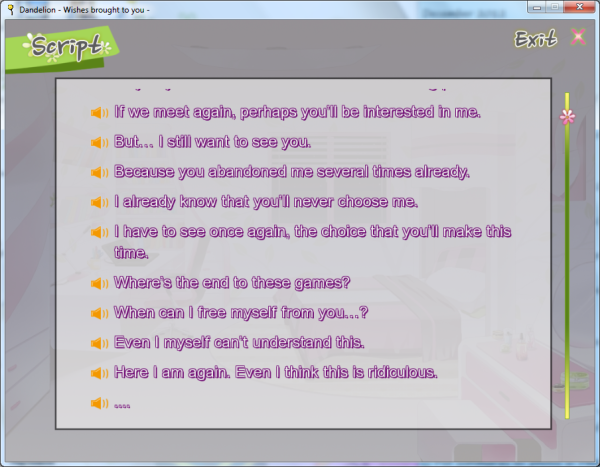 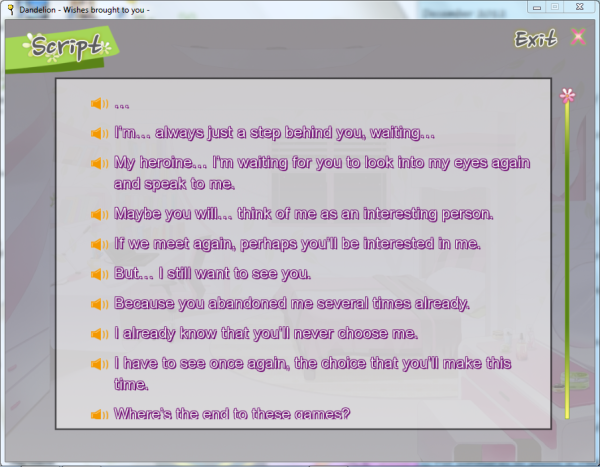 Reading these screens again after seeing the Behind The Story scene... wow, it just makes sense! I'm so amazed about this game's whole scenario/setup. It is definitely different from anything I've played in terms of overall story.

You know, with each playthrough, I disliked the Wizard more and more for erasing the heroine's memory or the guys' memories. But after watching Behind The Story, I feel bad for him... really bad. Forever living off of people's memories and granting wishes. What a boring life! I really recommend completing all 5 happy endings and watching the Behind The Story scene if you haven't already. And if you haven't, why are you reading this spoiler? :o

Anyway, I'm glad the Wizard did what he did. Heejung would be forever living a life because of her mom...

And that's my review / analysis of Dandelion. I highly recommend this game to any otome game / visual novel fans out there. For the price, the game is worth it because of the graphics, the sound, the voices, the high replay-value, and the whole entire story. It may not be for the weak-hearted because it is quite heart-wrenching in many of the routes. I'm sure once you played it the whole game, you will never forget the journey you took and the emotions you felt.

So, go to the site and try the demo if you haven't. And if you have already played Dandelion, try completing it 100% (which I still haven't done because I need to make time and to brace myself for the bad endings).

Thanks for reading my review of Dandelion and I hope for those that for those who still haven't tried the game out, have a better understanding of how great this game is. And for those who have played the game, I hope you enjoyed reading my analysis of the characters and story. ^_^
Tags: dandelion, dandelion wishes brought to you, english, game, heejung, jieun, jihae, jisoo, jiwoo, jiyeon, otome, review, wizard
Subscribe

Did you just bought the full game? :OOO TT^TT